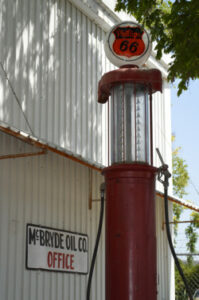 McBryde Oil Company has been “Fueling the Hill Country Since 1930”. That was not long after 19-year-old Rankin Carroll (R.C.) McBryde jumped off a hay wagon on its way into Centerpoint, Texas, determined to build a life and business for himself. A lifelong resident of Kerr County, “Mr. Mac,” as he was known to his friends, founded R.C. McBryde Oil Company in 1930 in Kerrville, Texas as the consignee for the Pierce-Fordyce Petroleum Company. As Pierce-Fordyce gave way to Sinclair Oil Company, McBryde Oil became a Sinclair jobber, before switching again to become a Phillips 66 jobber in 1956. It was also in 1956 that R.C.’s son Nowlin McBryde graduated from Texas A&M University and followed his father into the oil business. Nowlin began his career as an engineer for Phillips 66 in the oil fields of West Texas, but it wouldn’t take long for him to make his way back to Kerrville to begin working with his dad in the family business.

Beginning in 1964, Nowlin worked at his father’s right hand, learning the business by doing a little bit of everything. When he wasn’t driving a delivery truck, he was working on the fuel pumps or keeping the company’s books. In the late ’60s R.C. and Nowlin recognized the beginning of what would bring big changes to their business, their community, and the industry overall…the interstate highway system would connect the east coast to the west coast via Interstate 10 running right through Kerr County. The McBrydes knew this offered an excellent opportunity for them to grow their business and began scouting the best location from which to take advantage of the new highway. Nowlin was dispatched to a location 50 miles west of Kerrville in Segovia, Texas. It was 1969 when McBryde Oil Company bought a 5-acre piece of land in Segovia from a particularly unhappy rancher who was about to have his 240-acre ranch split in half by the new highway. Segovia Truck Stop, located at I-10 exit 465, has been selling gas and diesel and serving great diner-style food to long-haul truckers and families traveling cross-country since 1970.

After seeing his son’s success in building the Segovia Truck Stop, R.C. decided that Nowlin was ready to continue the McBryde Oil Company legacy on his own. Though Nowlin bought the company from his father in 1971, old habits die hard and R.C. would continue to come to the office for the rest of his life. There was a brief period in the late 1970’s when Mr. Mac notified the office that he would take semi-retirement. He told them he planned to start working only half days and would spend the rest of his time fishing and playing golf. This semi-retirement lasted about two weeks, after which time he reverted back to his full-time schedule and never mentioned retirement again.

Nowlin continued to grow the business for the next three decades, keeping the company strong through the many up and down economic times that would occur during that period. In 2005, Nowlin realized he wouldn’t be able to run the company forever and decided he needed a succession plan. With neither of his two daughters living near Kerrville, Nowlin determined that to keep the legacy of McBryde Oil going, he would need to sell the company.

In July of 2009, Nowlin struck a deal to sell McBryde Oil to Michael Burniston from Austin. When Michael and his wife Kathryn and their two daughters moved to Kerrville shortly after that, they brought a deep respect for the longstanding relationship McBryde Oil, and it’s founding family has had with its customers and the Kerrville community for over 80 years.

Yes, old habits die hard, until his passing in April of 2013, Nowlin continued to come to the office almost every day. He was there greeting his old customers and keeping up to date with local happenings, and he was always there when Michael had a question about the business that only someone with 60+ years of experience could answer. We grieve the loss of our friend and mentor, Nowlin McBryde. We hope to make him proud by continuing the McBryde legacy and dedication to customers that have allowed McBryde Oil Company to keep fueling the Texas Hill Country since 1930.

All prices are subject to change without notice.

Pump prices are for purchases at our 220 McFarland location.

Delivered prices are an estimate.